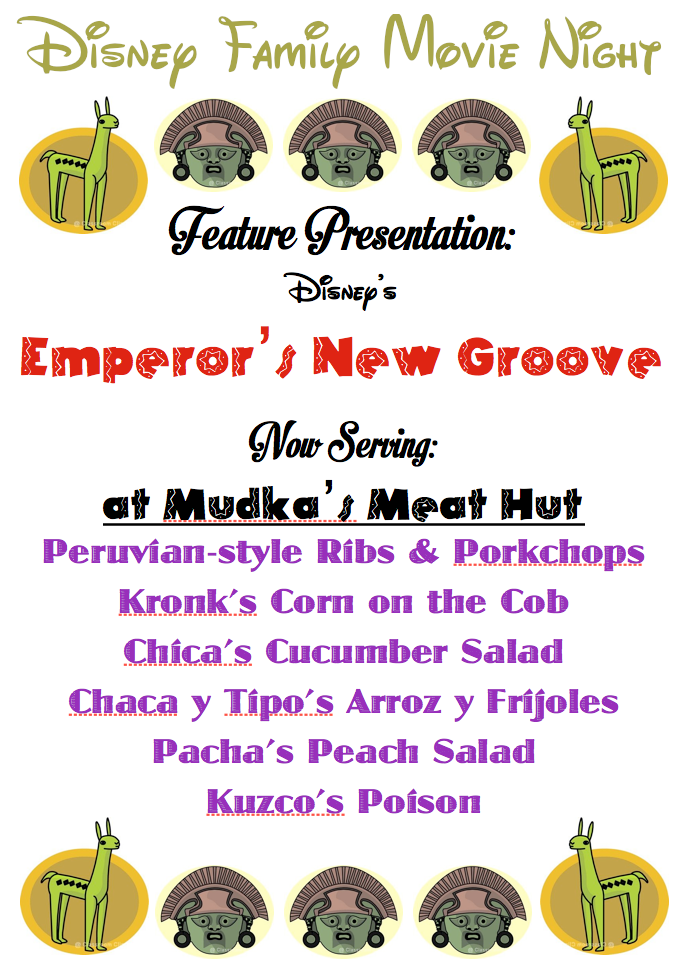 So last night's Family Movie Night was The Emperor's New Groove! It almost has a more "Pixar" feel to it than traditional Disney, but I have to say, it's one of Disney's funniest movies! I love it :) It started because corn on the cob season has reached us here in the south, and that is my favorite food group! So at our local Farmer's Market, we picked up some corn on the cob, and built our meal and movie around that!


Menu:
Peruvian-style Ribs
Peruvian-style Porkchops
Kronk's Corn on the Cob
Chica's Cucumber Salad
Chaca y Tipo's Arroz y Frijoles (Rice & Beans)
Pacha's Peach Salad
Kuzco's Poison
(the latter most is not pictured... nothing special, it was whatever we were drinking that night!)

And here's the photos!

Starting out, here's our craft for the evening... wee princess got a head start ;) I used my Cricut to cut out the castle and cottage images. 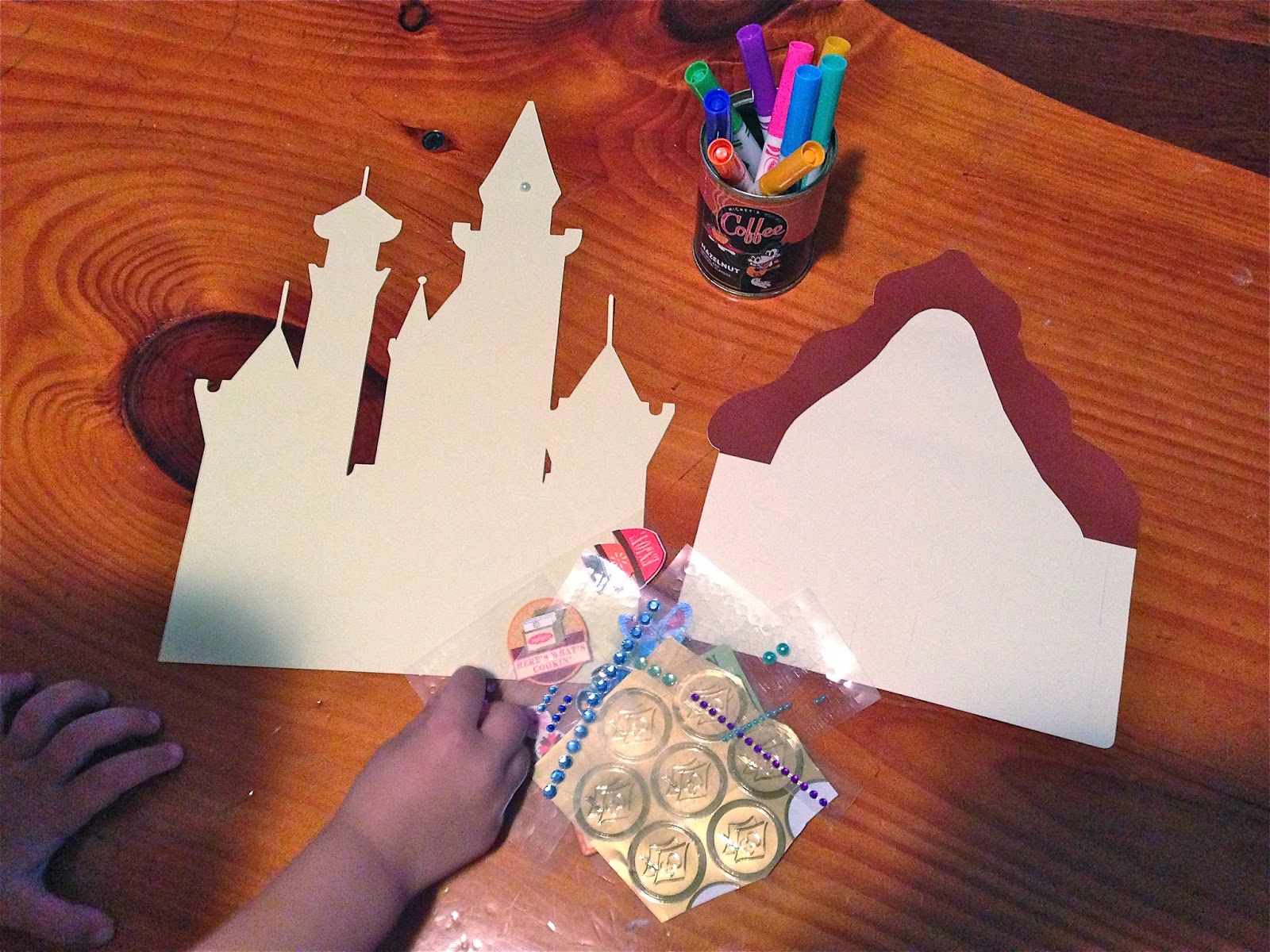 Next up, the spread! Complete with "Incan drawings" as DH called it and an alpaca-yarn poncho. I decorated the table with rich silky "royalty" colors, if you will, and added the bright red table runner as that's the color he wears as king. There's also a pile of jewels (bottom right corner- shown better in a later picture) to represent Kuzco's wealth. 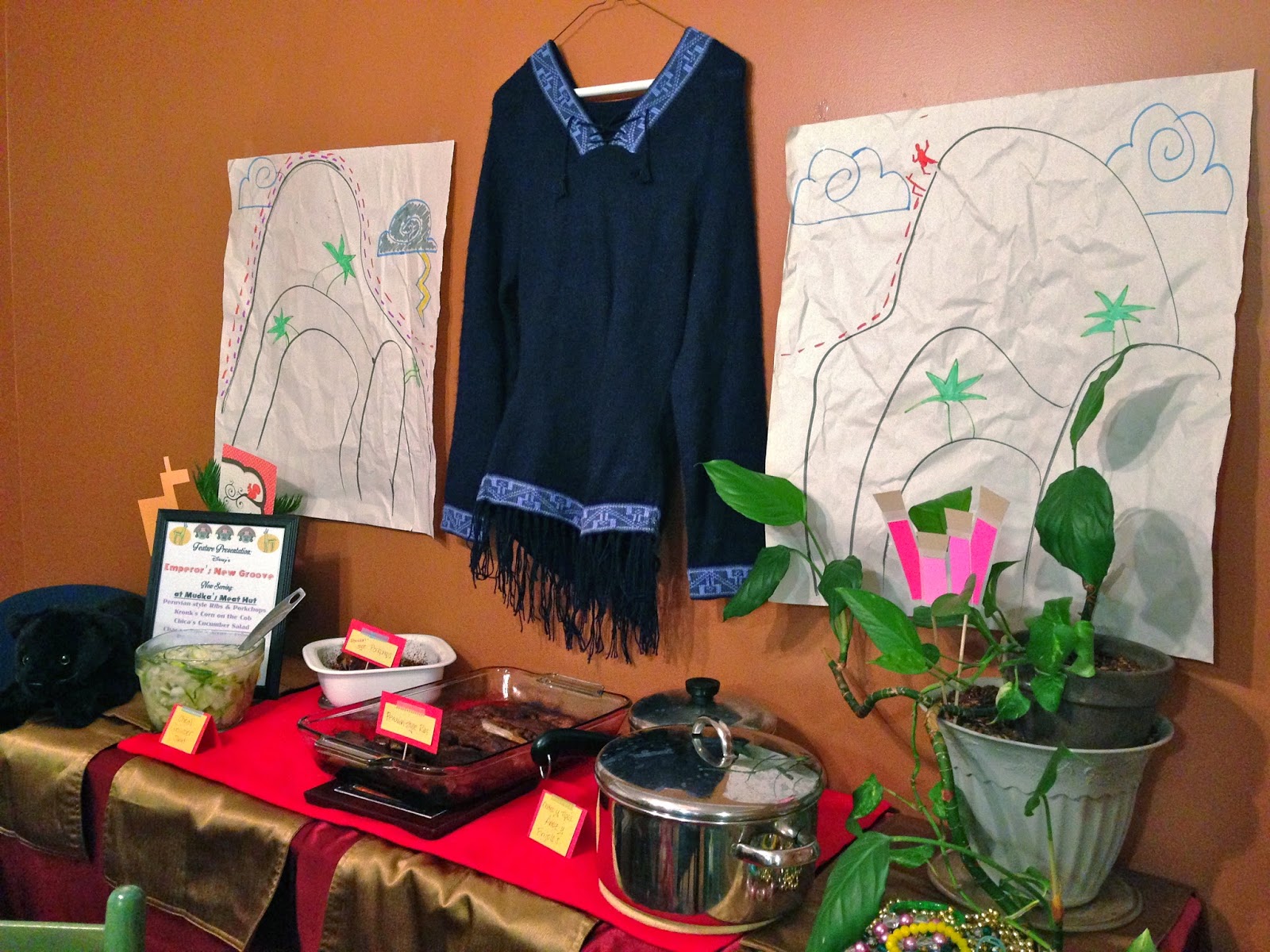 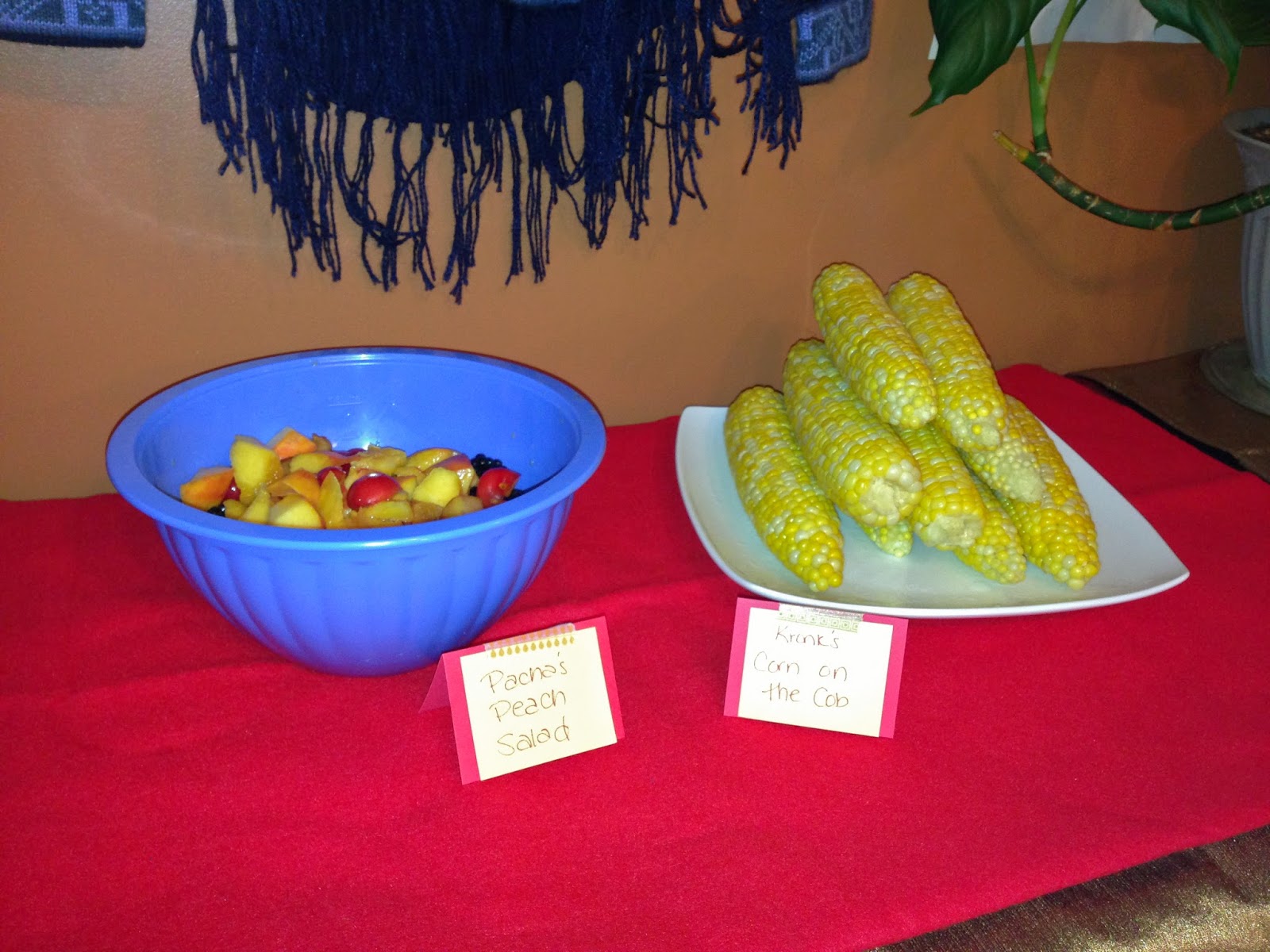 And we've got the menu, along with homages to the llama and squirrel in the background, and can't forget the jaguar! One of my favorite scenes... "HA!... no touchy..." 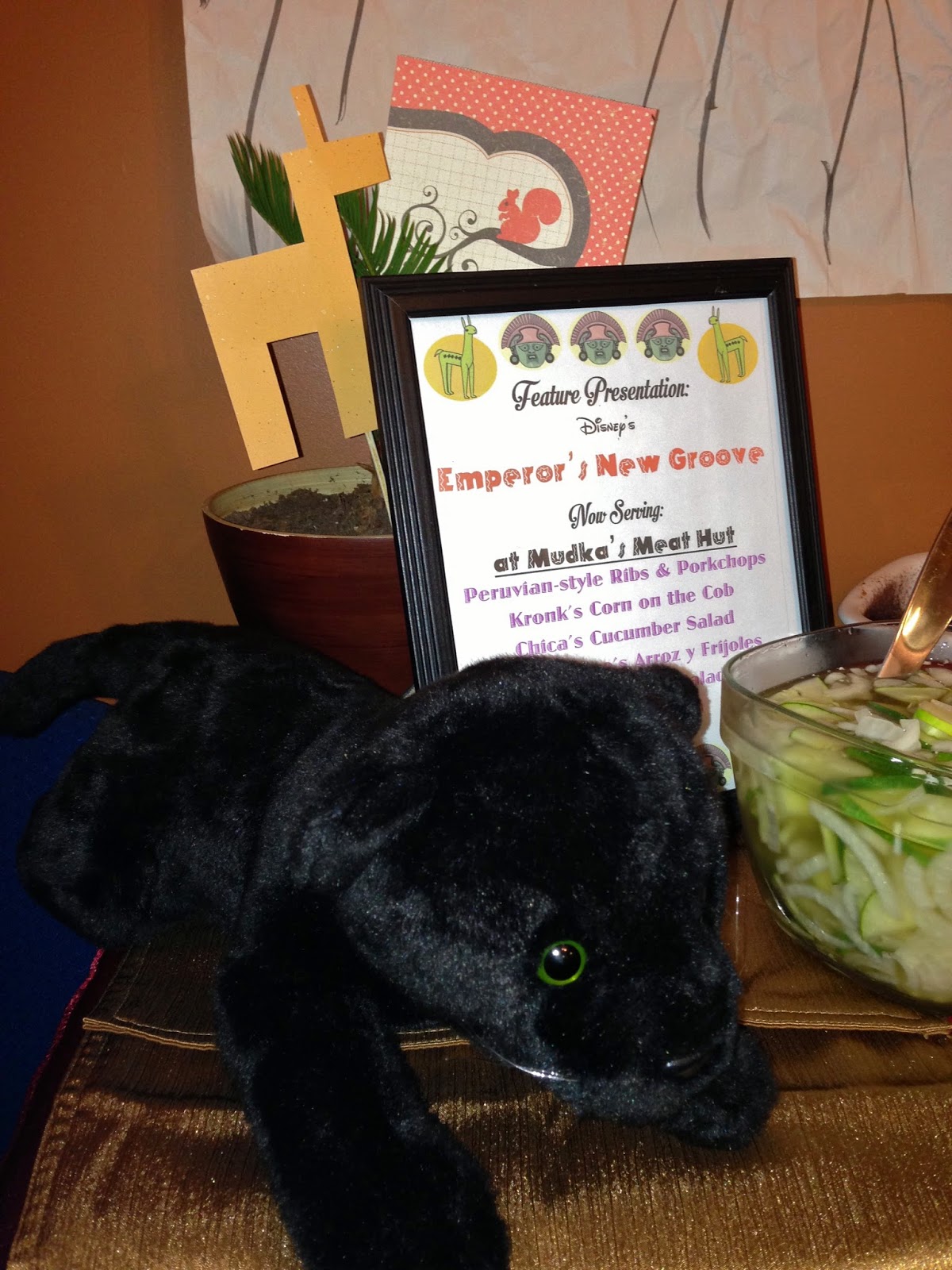 Here's Chica's Cucumber Salad. Again, the cucumbers were also local! We had a great haul at the farmer's market that morning! In the background is DH's Peruvian-style Porkchops. Local chops done up with a Peruvian rub. 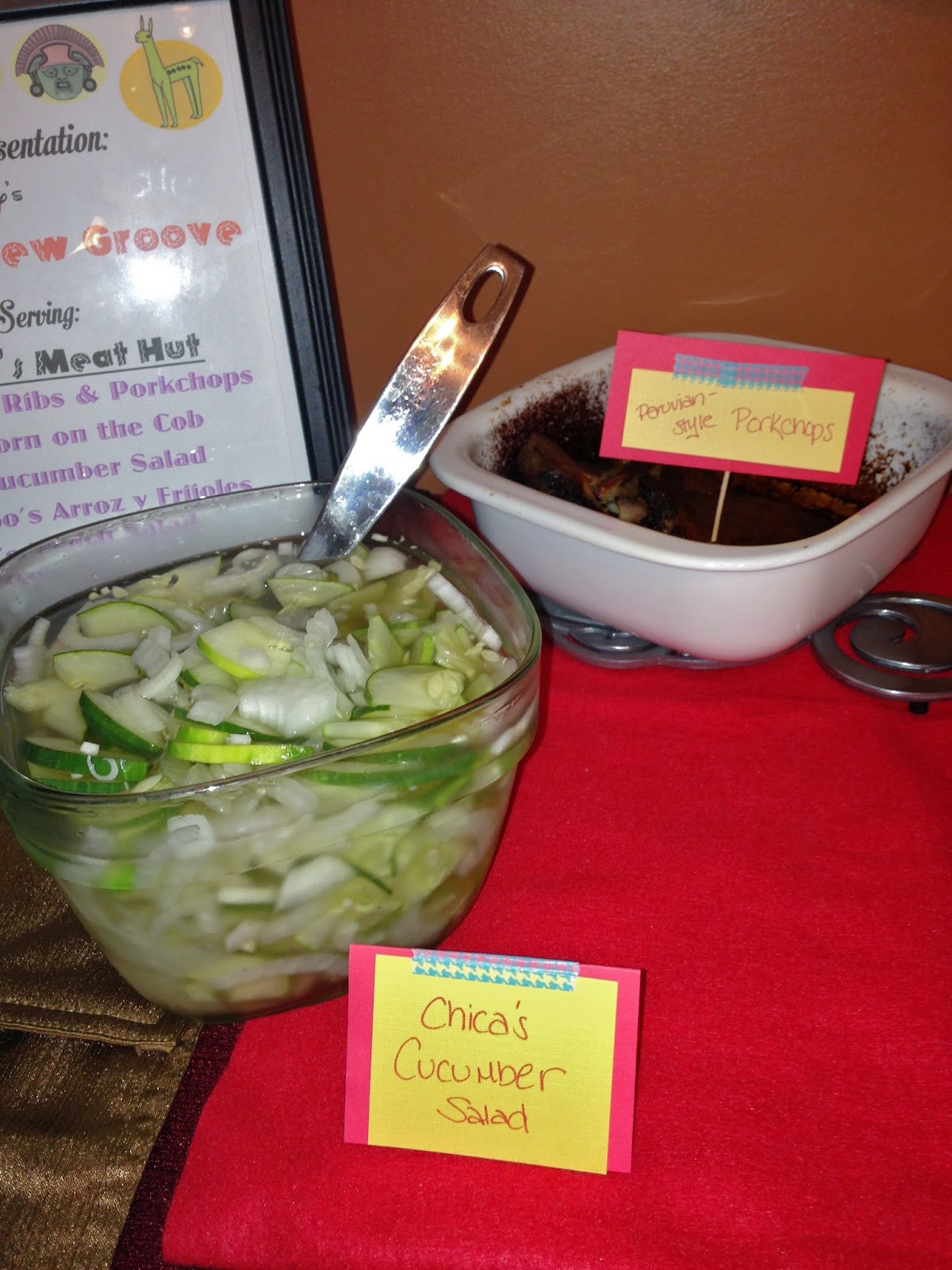 DH's (yet again local) Peruvian-style Ribs, done with the same rub as the porkchops. 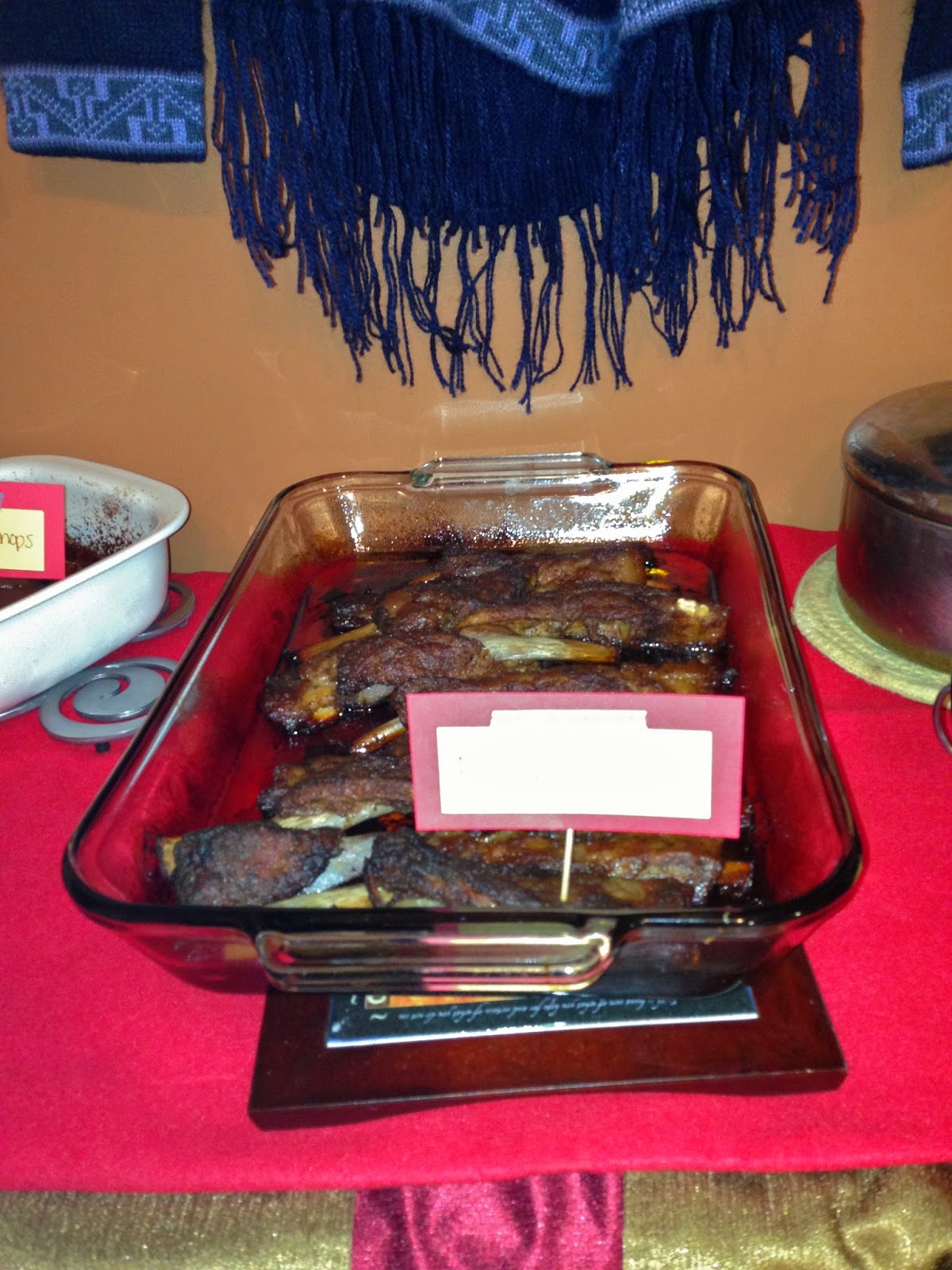 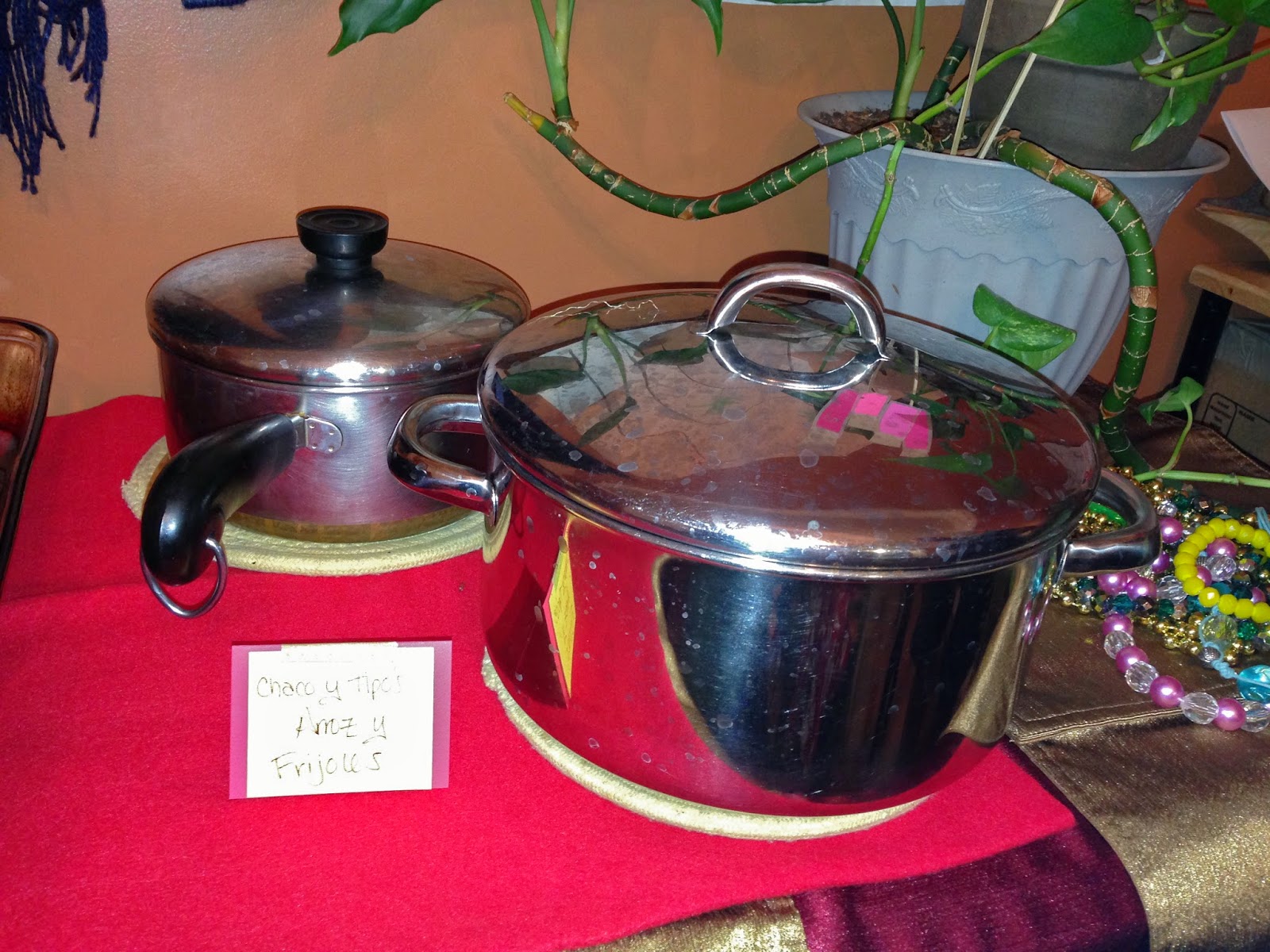 Couldn't forget to photograph "Kuzco's Poison!" These were probably my favorite decoration, hehe... oh and here's the pile of jewels. And here's the "Incan drawings" hehe... anyone recognize this scene?! :) 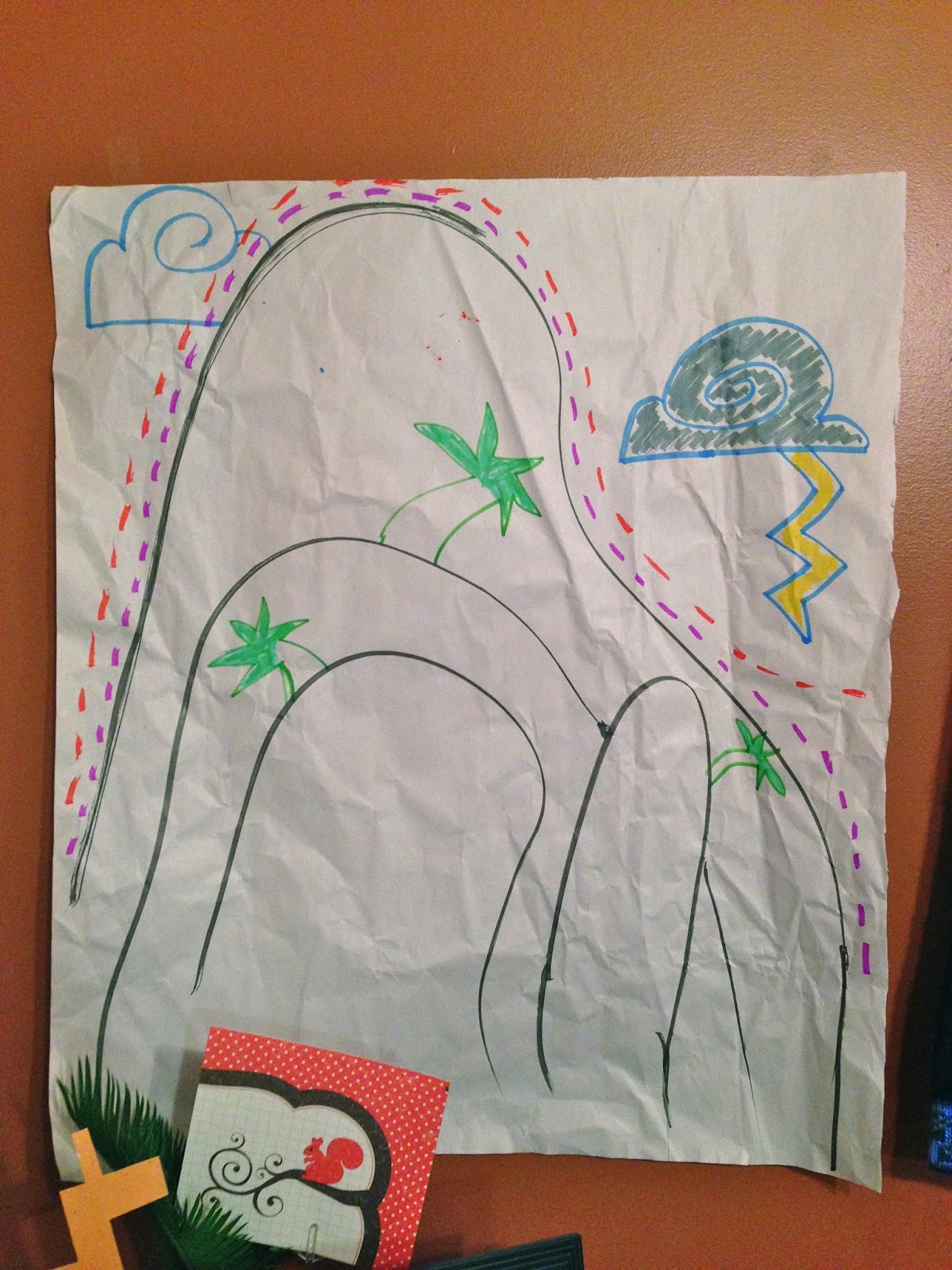 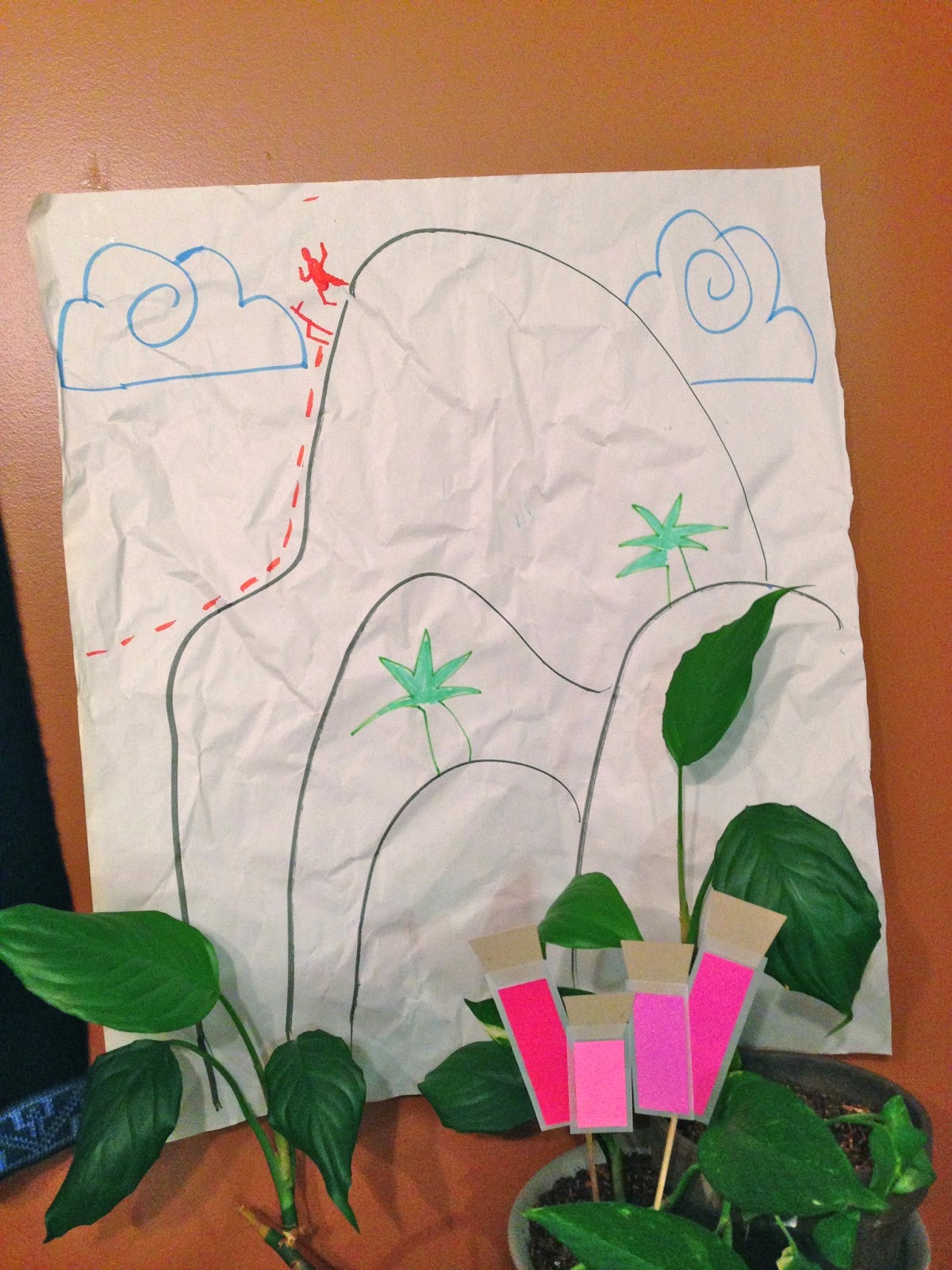 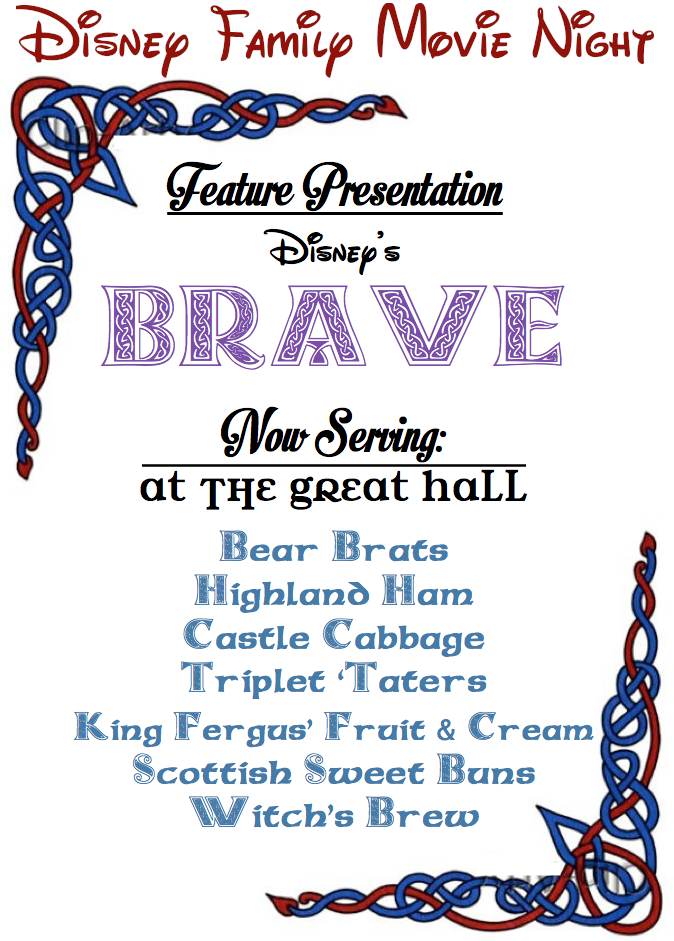 A few weeks ago, we had our second family movie night, featuring Brave! The past two weeks we've been on vacation visiting family up north, so no more recent movie nights, but we hope to get one in this weekend! Just like last time, I used mostly Pinterest (see my board here!) and Disboards.com to find most of my inspiration! This night was a bit more low-key than our last one as it was thrown together a bit last minute! I don't remember how we settled upon this movie, but here's the rundown...

And now what you've all been waiting for... a few photos! 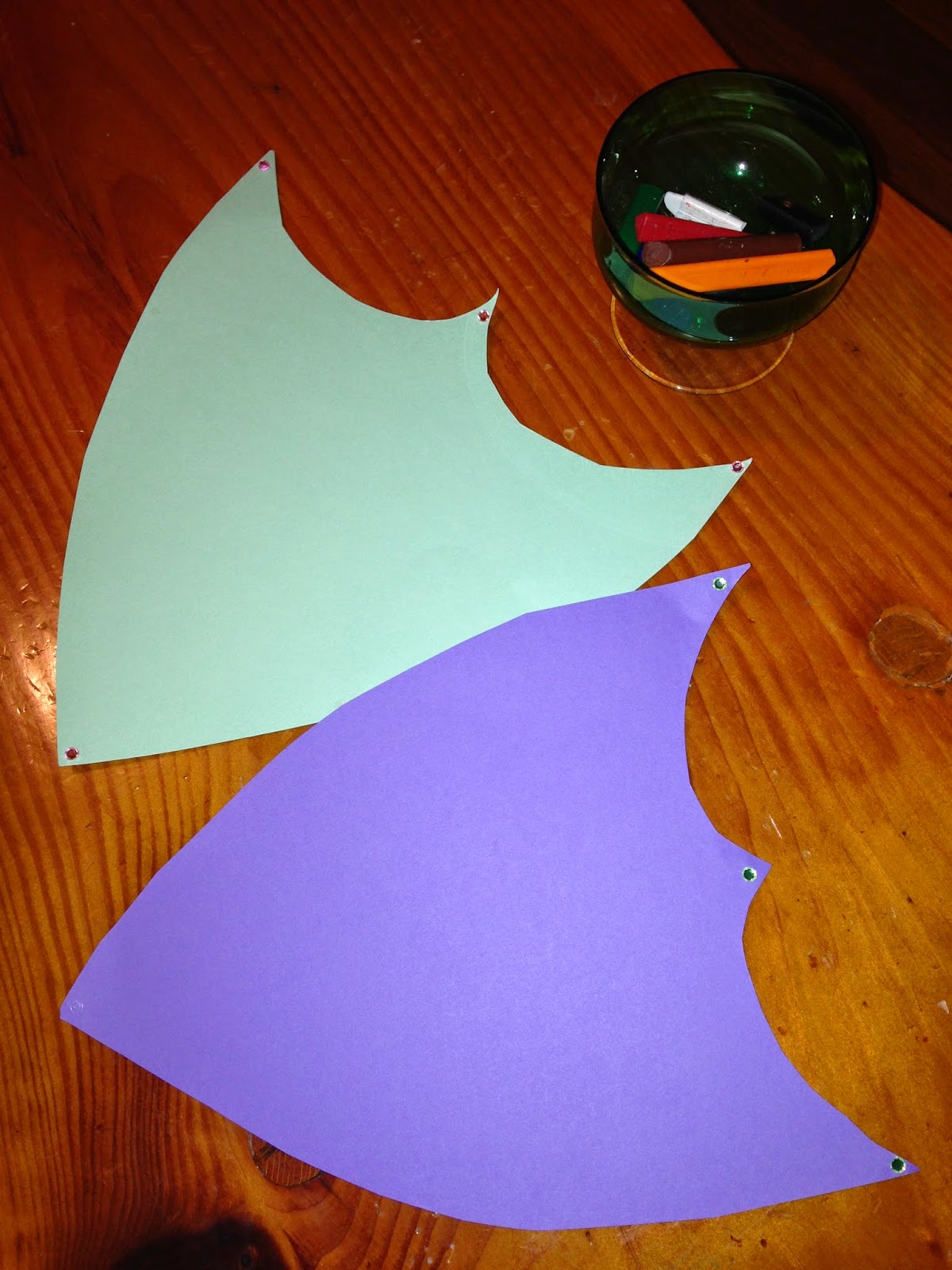 Here's the craft for the wee one. She loves anything that has to do with coloring :) I cut out some crude shields from construction paper, slapped on a few rhinestones (which the wee one promptly removed, lol), and let her color away! 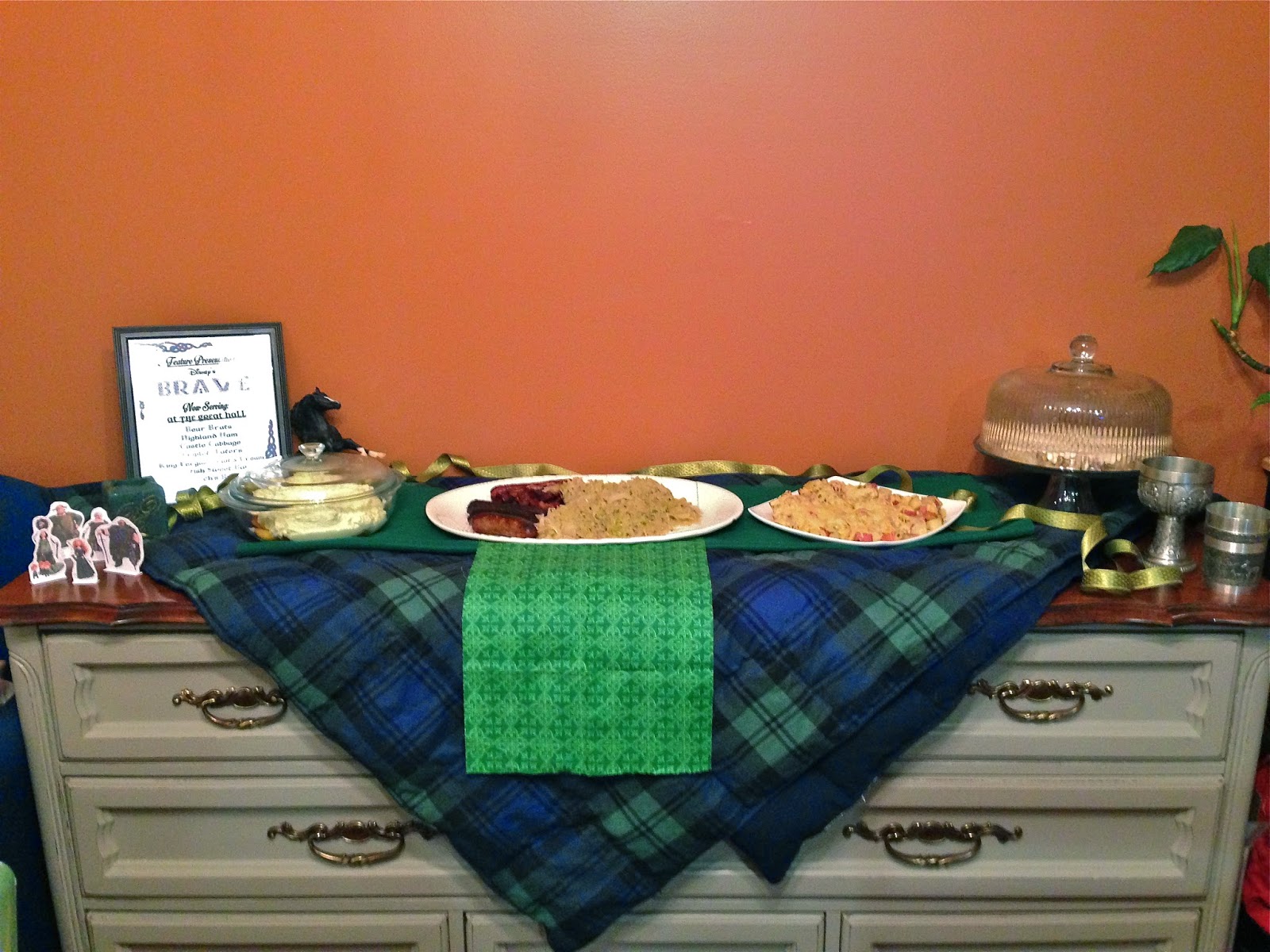 Here's the spread! Again, really simple this time around. Just a plaid throw, some Celtic fabric, and a green felt table runner. I also threw on some Celtic ribbon, a Celtic candle, and a few goblets. 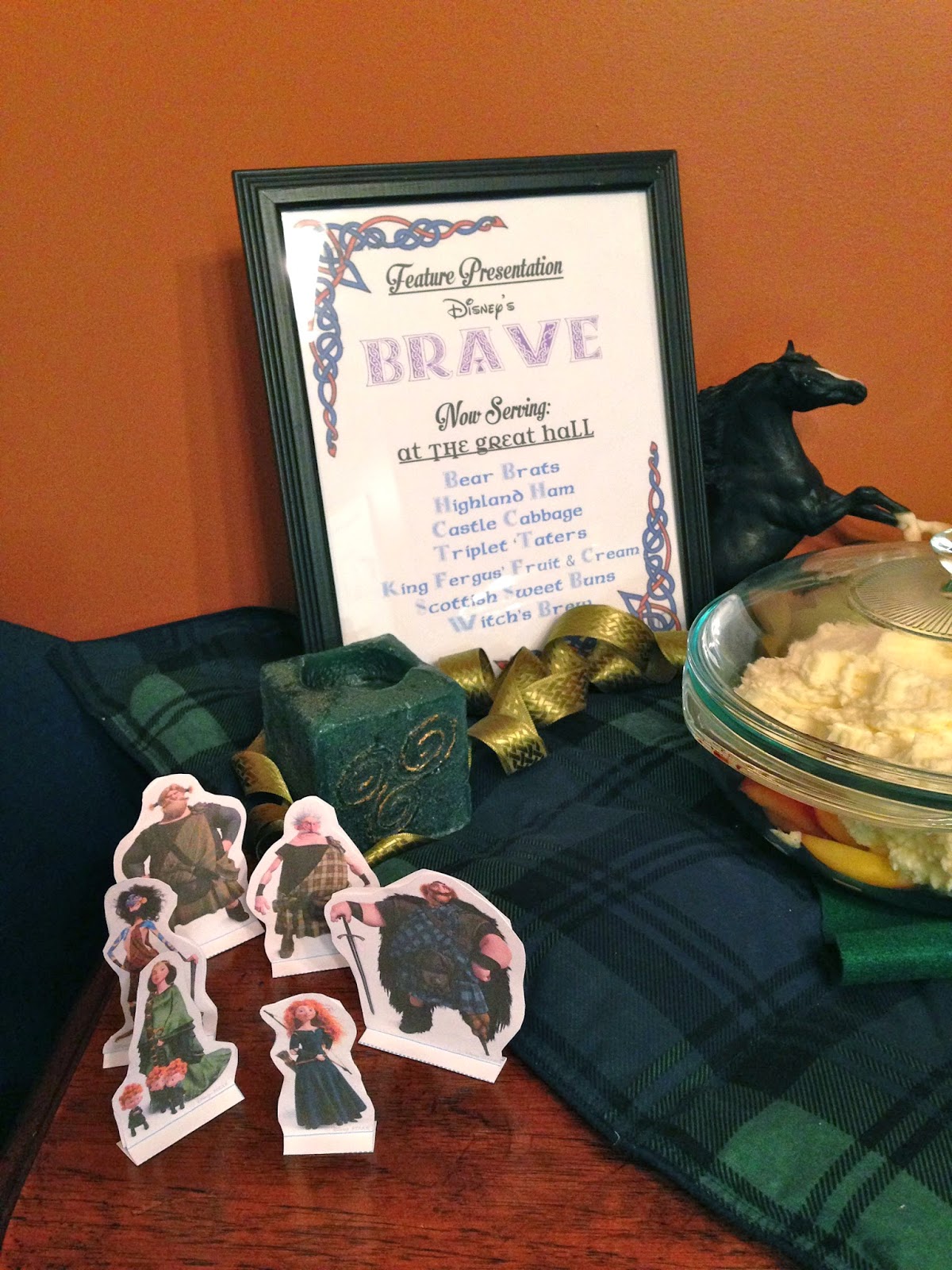 Here's the menu, a close up of some of the decorations, the cast of Brave (playset printed out from Disney Family) and of course I had to pull out one of my Breyer horses from my youth to stand in for Angus! 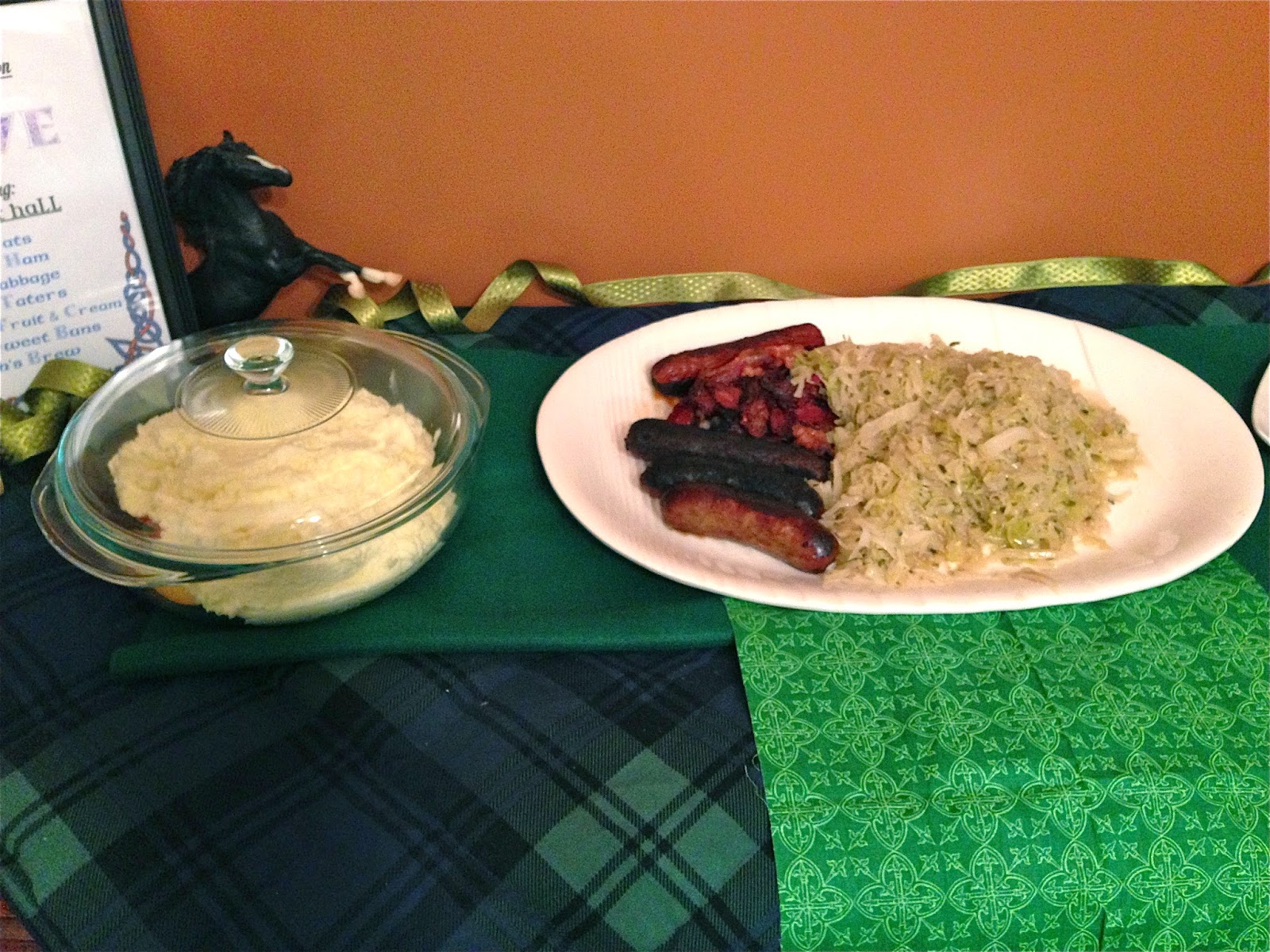 On the left is "King Fergus'" Fruit & Cream- peaches from our local farmer's market with fresh whipped cream. Then DH's plate on the right of "Bear" Brats (bratwursts), "Highland" Ham (aka. bacon), and "Castle" Cabbage (just standard cooked cabbage). 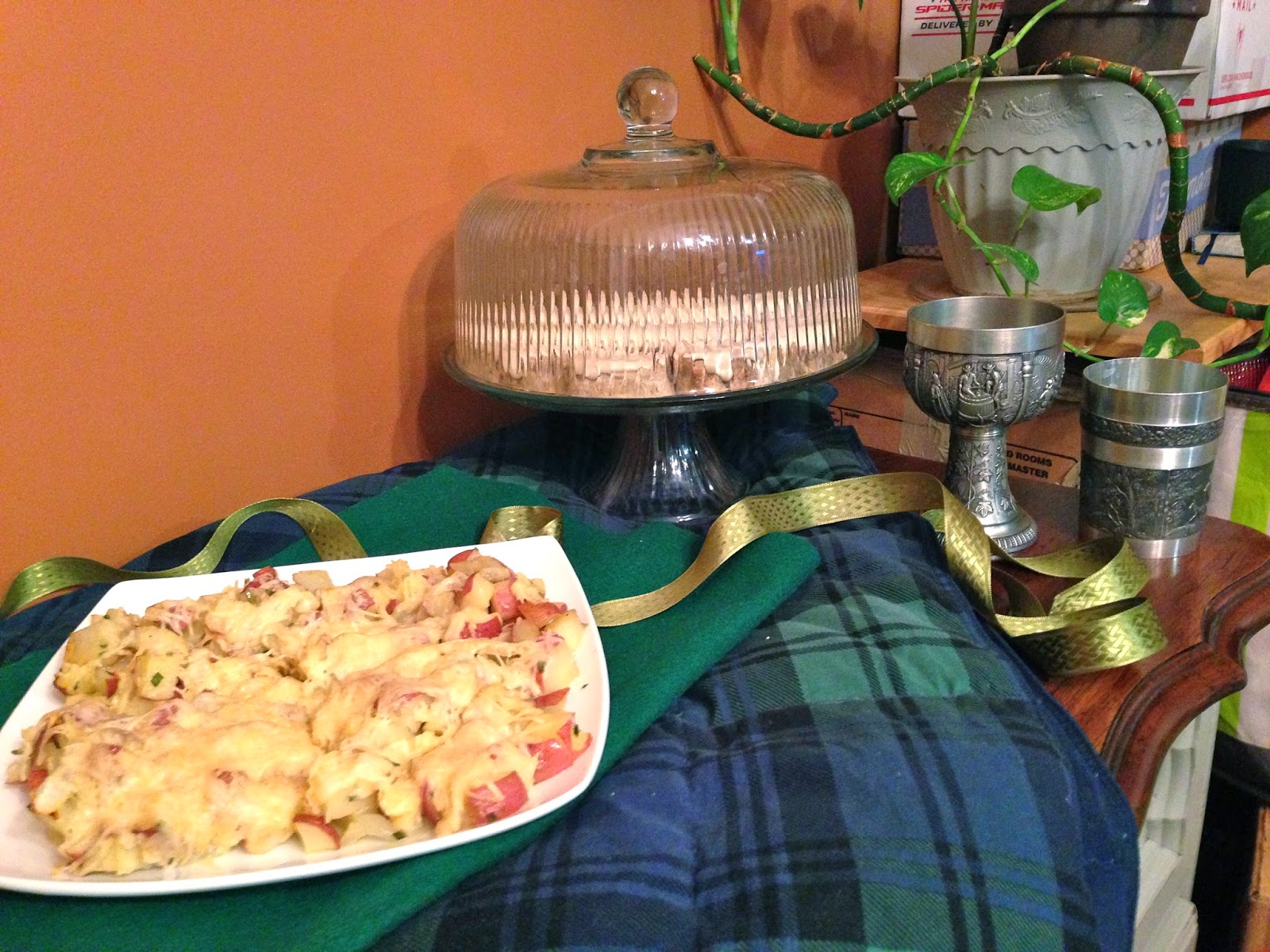 On the left are the "Triplet" 'Taters- just breakfast potatoes topped with parmesan. I'll post the recipe on here soon! It's a staple in our house for breakfast, lunch, or dinner! To the right are the Scottish Sweet Buns as well as the "Witch's Brew" which was nothing special, just whatever we were drinking that night, but in a festive goblet!! :) 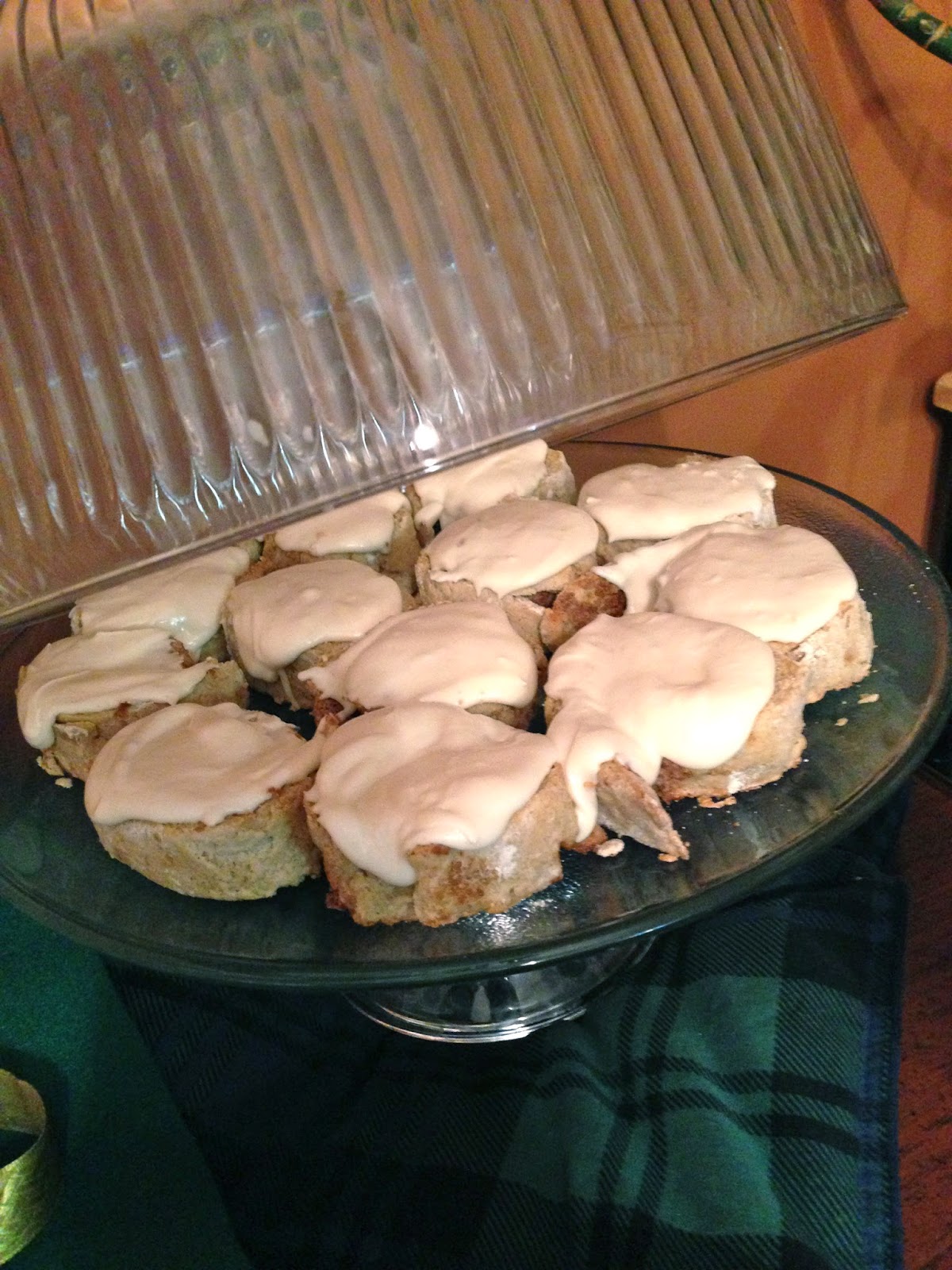 Last, but certainly not least, Scottish Sweet Buns: recipe from Disney Family. We used oat flour to make them gluten free, left out the walnuts as we're waiting to introduce nuts to the wee princess, and just used our standard cake frosting recipe for the topping- delish!!! We promptly made another batch the next day, they were THAT good! 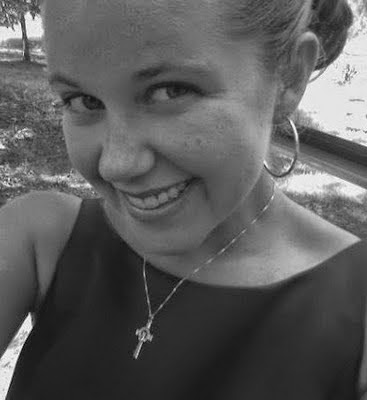 Veteran's wife, mother to two wee lassies, Jesus-follower, Disney-lover, homeschooler, homemaker, crafter, organizer, and Independent Scentsy Consultant - love having a beautiful smelling home without the soot and open flame, especially with small ones and pets around! 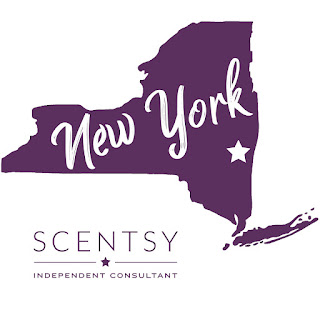 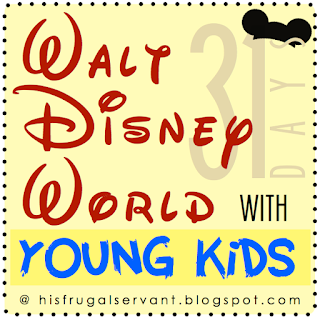 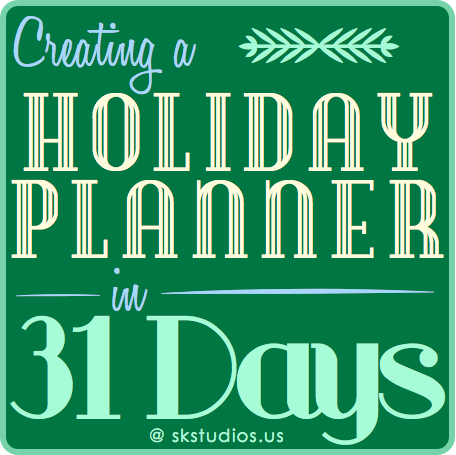